Sensat's Survey Manager, Ben Craigie, reveals what you should consider when looking at the procurement or conduction of topographic surveys using UAV platforms and what, from a traditional terrestrial survey point of view, may need to be appreciated at the commissioning stage.

In November at the Geo Business event, I spoke alongside my colleague and Sensat co-founder, Harry Atkinson, surrounding the use of UAVs (Unmanned Aerial Vehicles) and the accuracies achievable when conducting topographic surveys. During the session, I referenced the RICS publication ‘Earth observation and aerial surveys 6th edition global Guidance Note’where they state the achievable accuracies using UAV data capture at the centimetre level and we explained how we achieve that at Sensat. More information can be found in that publication but any further discussion on the topic of accuracy is beyond the scope of this piece.

The benefits and pitfalls of using UAVs for topographic surveys

The use of drones for capturing survey data is rapidly becoming ubiquitous and when conducted professionally, by surveyors, the benefits of rapidity, volume, safety and sustainability are already well understood. It should be clear however that drones are only one of a number of tools within a surveyors toolbox and therefore will not always be the best tool for the job (or at least every area of a job). UAVs provide the ability to cover large areas in relatively short amounts of time and capture those areas in massive amounts of detail, leading to rich datasets often running to billions of data points. However, this (remote) capture method is by definition non-intrusive and therefore certain elements of the terrain will always be overlooked.

For a Topographic survey, two payloads are commonly flown simultaneously or consecutively over the same area in order to create a detailed data set of the topography. These payloads are an RGB camera (for later photogrammetric processing) and a LiDAR unit for direct measurement of the ground/features (read LiDAR vs. Photogrammetry for more). The camera captures high definition colour images but the resulting data is limited to that of clearly visible/well-lit surfaces. A tree canopy is an obvious example where the canopy will be captured in great detail but the ground below is not observed, instead often appearing as dark spots at the canopy level. Here the LiDAR steps up, firing a laser directly towards the earth. The canopy may form the majority of the return signals but each gap to the ground will allow the laser to penetrate through and capture the desired level. These payloads, when combined, capture the vast majority of the details you could hope to record within a topographic survey but there remain some areas where still limited or inadequate data will be captured. Ditches are a notable feature that are hard to determine; by nature, they are below the general level of the surrounding earth and often support a hedgerow or other dense vegetation. When considering this point it should be noted that almost no survey ever perfectly captures all details or can suggest that not a single feature has been overlooked. A laser scan of a bridge abutment for example would not reach behind the moss to reveal a hidden land-drain outfall or a ground survey would likely miss a solar panel affixed to a high level, shallow-pitched roof that’s obscured from street level.

The answer then is to target specific areas for additional investigation when and if the level of detail demands it. The surveyor for their part should ensure that any area of the site that may contain further features behind the apparent extent is clearly labelled so a further investigation can be undertaken as necessary. Even terrestrial-based survey teams would not expect to capture every nuance of obscured features but would look to target the most accessible/least vegetated zones to maximise productivity and minimise ecological destruction. 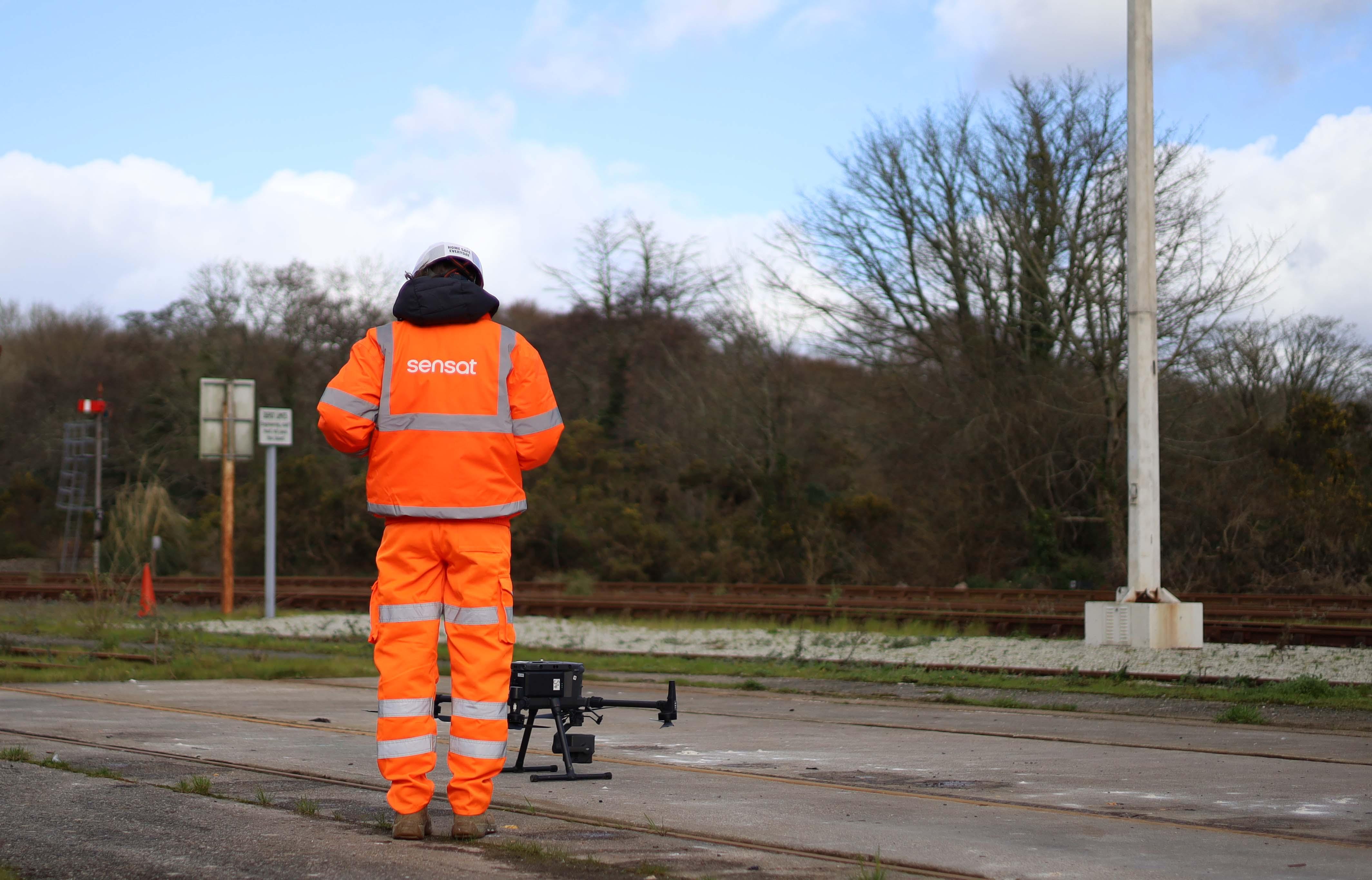 Returning to the combination argument, one of our teams recently conducted a survey of a large site area in Somerset. It was understood that some ditches/watercourses were to be modelled and that the aerial survey was unlikely to capture the required level of detail. The solution was to survey the entire area using a UAV as the starting point. Analysis of the data then allowed us to understand which areas (or in some cases individual points) needed further attention. We were then able to target a ground team to secure the few remaining elements and ultimately present our client with a full and dense data set, still far quicker and at less expense than an exclusively terrestrial survey.

Considering the above, It’s important that the level of detail delivered is communicated to and agreed upon with clients at the commissioning stage. Many incumbent engineers or others responsible for the procurement of surveys appreciate all the benefits a survey captured with UAVs will provide, but may not have considered how this affects the deliverables and specifically CAD models.

The creation of CAD drawings from UAV data sets is bound by the detail obtained but there is a further consideration. A traditional terrestrial survey could be described as a 2-stage process where points, line features and associated annotation are recorded on-site with the final CAD drawing creation being a relatively straightforward further organising and cleaning of this data (perhaps with the creation of certain other interpolated items). Whereas, extracting CAD elements from a UAV survey is a different skill set and might be considered more of a three-stage journey. At the first stage, the data is captured before being post-processed to create a 3D point cloud (the 3D output from aerial photogrammetric/LiDAR data). The CAD operator then needs to understand how the data has been obtained and therefore the elements that may be obscured from capture. Further, they will need the ability to model the specified elements from the point cloud in a systemic and considered way. This is more akin to an experienced terrestrial surveyor standing on site and determining what and how to record the topographic features, rather than a CAD operator simply finalising and creating an aesthetically pleasing model.

As a final thought, with all the data that is captured from an aerial survey, it can seem somewhat counterproductive to refine the data into a few thousand elements within a CAD model. Sensat operates and provides users with a unique CVE (Common Visualisation EnvironmentⓇ) where multiple datasets, including resulting designs, can be overlaid and analysed in their entirety. With this technology and the advances in AI, perhaps in the future, the industry will find a way to move away from CAD models altogether in favour of direct use of the data itself.

The best decisions are made together

Power the decisions that make your Infrastructure a reality.